THE STATE FLAG OF THE REPUBLIC OF UZBEKISTAN

The law about "The State Flag of the Republic of Uzbekistan" was adopted on November 18 in 1991 in the 8th session of the Supreme Council of Uzbekistan.

The flag of our country is a symbol of the sovereignty of the Republic. The national flag of the Republic represents the country internationally when official delegations from Uzbekistan visit foreign countries, as well as at conferences, world exhibition, and sports competitions.

The national flag of the Republic is a right-angled colored cloth of three horizontal stripes: blue, white and green.

Blue is the symbol of the sky and water, which are the main source of life. Mainly, blue was the color of the state flag of Temur.

White is the traditional symbol of peace and good luck, as Uzbek people say "Ok yul".

Green is the color of nature and new life and good harvest.

There is a new moon, which symbolizes the newly independent Republic.

There are twelve stars, which stand for spiritual sign. The stars also signify the historical traditions of the Uzbek people, as well as ancient solar calendar. A particular attention to twelve stars in the flag is explained yet by another suggestion, that in the states previously existed in the territory of modern Uzbekistan the scientific thought as "Astrology" had seen its rise. The stars in the Uzbek flag also point to the ancient roots of local culture, the aspirations of Uzbek people towards perfection and loyalty. 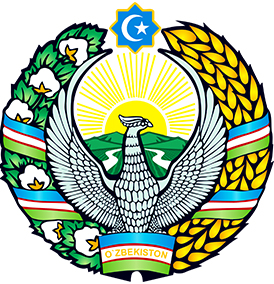 The law about "The State Emblem" was approved by the 10-th session of the Supreme Council of the Republic of Uzbekistan on July 2, 1992.

The new state emblem of the Republic of Uzbekistan was created to reflect the many centuries of experience of the Uzbek people.

The state emblem of the Republic presents the image of the rising sun over a flourishing valley. Two rivers run through the valley, representing the Syrdarya and Amudarya. The emblem is bordered by wheat on the right side and branches of cotton with opened cotton bolls on the left side.

The eight-angle star is at the top of the emblem, symbolizing the unity and confirmation of the republic. The crescent and star inside the eight-pointed star are the sacred symbols of Islam. The mythical bird Semurg with outstretched wings is placed in the center of the emblem as the symbol of the national Renaissance. The entire composition aims to express to desire of the Uzbek people for peace, happiness and prosperity. At the bottom of the emblem inscribed the word "Uzbekistan" written in Uzbek on a ribbon in the national colors of the flag.

The law "On national anthem of the Republic of Uzbekistan" was adopted on the December 10, 1992 at the 11th session of the Supreme Council of Uzbekistan.

Poem by A. Aripov
Music by M. Burkhanov

My country, sunny and free, salvation to your people,
You are a warmhearted companion to the friends
Flourish eternally with knowledge and invention,
May your fame shine as long as the world exists!

Refrain:
These golden valleys-dear Uzbekistan,
Manly spirit of ancestors is companion to you!
When the great power of people became exuberant
You are the country that amazes the world!

Belief of generous Uzbek does not die out,
Free, young children are a strong wing for you!
The torch of independence, guardian of peace,
Just motherland be eternally prosperous!

Refrain:
These golden valleys-dear Uzbekistan,
Manly spirit of ancestors is companion to you!
When the great power of people became exuberant
You are the country that amazes the world!

The mountains and foothills are about 1/5 part of the country. The east of the country is dominated by middle and high landforms. within the republic. Within the territory of the country there are the slopes or the closure of the West Tien Shan (Ugam, Pskem, Chatkalskiy, Kurama) and the Pamir-Alai (Zeravshan, Turkestan, Hissar, Kugitangtau Baysuntau). To the south and west, they gradually fall and into the plains. Stretch between mountains large cavities: Kashkadarya, Surkhandarya, Zarafshan, Samarkand are located. The largest intermountain trough - Ferghana hollow (valley) - lenght 370 kilometers and width up to 190 kilometers. On three sides of it are surrounded by the mountain ranges and is opened only from the west. On the border with Afghanistan is a vast Amu-Darya basin.

The Republic of Uzbekistan is situated between the rivers Amu Darya and Syr Darya, and covers an area of 448.9 thousand sq. km. The length of the territory of the Republic from west to east is 1 425 km from north to south - 930 km.

The territory in the north and north-east of the Republic of Uzbekistan borders with Kazakhstan, in the east and south-east with Kyrgyzstan and Tajikistan in the west with Turkmenistan, in the south with Afghanistan. The total length of the country border is 6 221 km. The long border with Afghanistan is 137 km, with Kazakhstan - 2 203 km, with Kyrgyzstan - 1 099 km, with Tajikistan - 1 161 km and Turkmenistan - 1 621 km.

According to The State Committee of the Republic of Uzbekistan on statistics, as January 1, 2021 the population of the republic is 34 558 900 people.